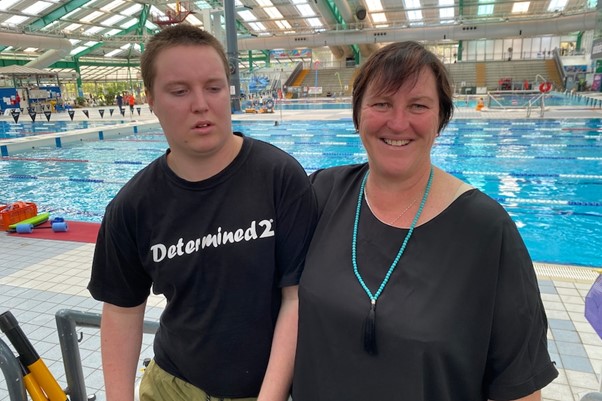 Article courtesy of the ABC by Alina Eacott 3 May 2021.

This Adelaide teenager has autism and is non-verbal.
“Mitch is probably — if you could label him that way — one of the most autistic people you’d ever meet,” said his mother Kim Langes.

“He tackles life the best he can and we’ve always thrown Mitch in the deep end to have a go.”

Mitch began underwater immersion therapy about 18 months ago. Using scuba gear he swims up and down the pool, playing with toys and interacting with his instructor.

“It brings this calm to him that you don’t see normally,” she said.
“Being in water with every pore of your body being fed by water — he was probably a natural candidate for immersion therapy.”

Mitch is one of 55 people participating in immersion therapy through provider Determined2 at the Adelaide Aquatic Centre. Some have intellectual disabilities, some have physical disabilities and others are recovering from serious injuries. The business has boomed since people have been able to fund their sessions through the National Disability Insurance Scheme (NDIS). His instructors have also seen huge development in Mitch’s ability and willingness to bond and communicate with them, despite being non-verbal.

“So many people put so much emphasis on the spoken word, but communication is done on so many different levels,” said immersion therapy specialist Anja Collins.
“It’s lots of eye contact, lots of smiles, lots of claps, lots of positive hand gestures. Everybody underwater is non-verbal so we’re all on the same level.”

For the last two years researchers at the University of South Australia, including exercise physiologist Kade Davison, have been working to quantify how and why the therapy is proving to be so successful.

“Everybody’s equal underwater I guess is what’s coming through from our research,” Dr Davison said.
“For people with a physical disability, they can get under the water and do things they can’t do on land.
“People get physical benefits, psychological benefits, social benefits.”

Dr Davison said providing weekly sessions funded through an insurance scheme was the first service of its kind.
“This is, as far as we can tell, really unique in the world,” he said.
“The benefits speak for themselves … so we are now developing that evidence base that will permeate through the international literature, spark some interest and I think we will see it spread.”

Over time, Mitch has begun to interact more, throwing a ball back and forth with his instructor Ms Anja Collins.

During a recent session, Mitch reached out to hold her hands.
“We were just looking in each other’s eyes and it was one of those ‘oh wow’ moments. It was very, very cool,” Ms Collins said.
Mitch’s mum — who recently donned scuba gear and joined her son in the water — has also noticed progress, both physically and emotionally.
“For Mitch, there’s normally a constant buzz, a rock, a movement [and] that’s missing when he’s straight out of the pool,” Ms Langes said.
“His capacity isn’t limited, he can do lots of things.
“We just have to put the effort in and find the experiences.”